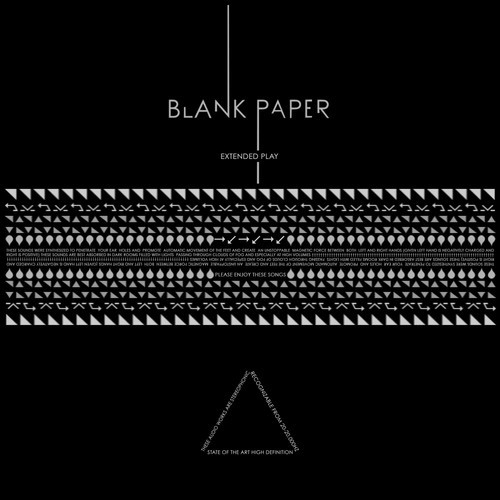 Blank Paper is a Brooklyn-based Synth-Pop Quartet comprised of Marie Kim (vox / keys), Taylor Bense (keys / synth), Cory Sterling (keys, bass), and Chris Holdridge (drums / synth). The group is the result of four eclectic and distinctive musical backgrounds that have come together to produce playfully melodic and dance friendly, yet dark synth-pop music. The band originated in NYC in 2012 and released their debut EP, Tape Dreams in early 2013. “Whip” is the third single from their self-titled EP, which came out yesterday!
Several years prior to the release of the first Blank Paper EP, the quartet met and became friends in college. Taylor Bense (at the time) a session guitarist and songwriter, invited Marie Kim to start singing on his compositions and write together. Taylor, Chris Holdridge and Cory Sterling had a band together, and Marie her own. After these projects disbanded, the four of them naturally came together to write and perform, sharing their passion for feel-good music with a darker edge.
Artists like Kavinsky, Little Dragon, The Knife, and The Gorillaz inspire their sound, but the band’s originality and musicianship take Blank Paper to a new level of innovation within the pop context. A rarity in electronic synth-heavy music, their live show is completely free of laptops and backing tracks.

Check out the album now on Spotify!