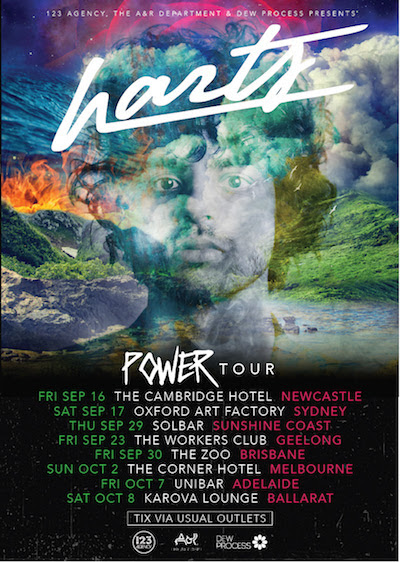 Harts has already had a huge 2016, releasing two hit radio singles in “Peculiar” and “Power“, as well as touring non-stop – storming the UK and Europe earlier in the year, before returning home for a triumphant set on the hallowed Splendour In The Grass stage in July. He is now poised to unleash his sophomore album, the follow up to his critically acclaimed debut Daydreamer in 2014, and the follow up EP Breakthrough in 2015 – records that caught the attention of some of the biggest names in music, including the late, great icon Prince, who became a mentor to the young Melbourne phenom.

Despite the mammoth sonic scale already exhibited by “Peculiar” and “Power” and set to be revealed across all of the album’s 14 songs, Smoke Fire Hope Desire was remarkably self-recorded in Harts’ home studio in Melbourne – its impressive scope the culmination of what the “one-man music-making machine,” attributes to spending years developing his sound as a performer and a producer. The album is the sound of an artist who has locked his musical identity and his voice into his sights, and as Harts admits has allowed himself to be influenced by, “a lot of what I was seeing in the world around me – very current day issues, mixed with my own thoughts and challenges in my life.”

The result is a record that seems destined to find success on both a local and a global level.