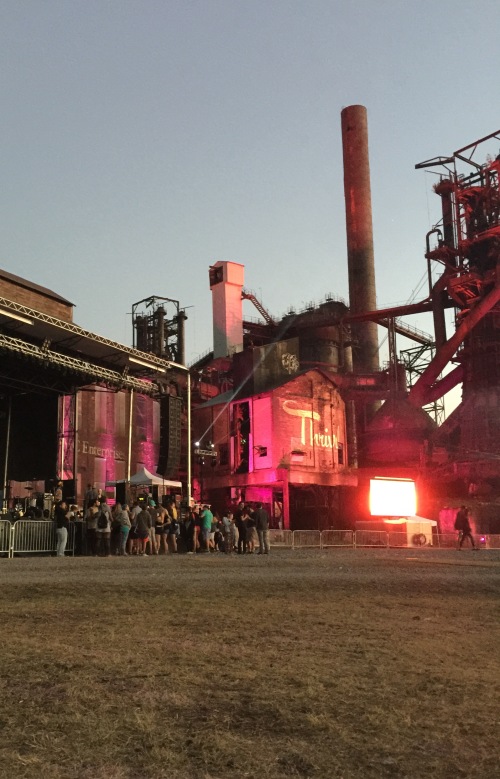 Thrival Festival just continues to get better and better every year. This year we were introduced to a new venue, the Carrie Furnaces. The festival also brought it’s largest lineup yet. I’ve saved you guys the trouble of reading all the other articles and posts out there, I’ll tell you the gist.

Friday wasn’t the best, and there’s a lot of feedback on social media to verify that. There were long lines galore; for drinks, for wristbands to GET drinks; and some heavy confusion around drink tokens. Oh, and then they ran out of water. BUT ALAS, no fear, they fixed everything all up for Saturday which was amazing! It’s not very often that an event like this fixes up main complaints in time for the following year, let alone Day Two!

The music has great feedback from Friday (shout-out to Lettuce!!!) EXCEPT for one MAJOR setback. Hmm…let’s see, we have Daya performing and we have The Chainsmokers performing. Daya and Chainsmokers have the hit song “Don’t Let Me Down” and yet they definitely let everyone down by not performing that song together! Whyyyyy? Blasphemy! I seriously don’t get it, can someone explain this to me? There was a chance for some legendary shit right there. *big sigh*

But, here’s a video of them performing their brand new song, “All We Know” featuring Phoebe Ryan:

Anyway, according to festival goers, Saturday ran much smoother and they nixed whatever the hell those drink tokens were about (Thank goodness because no one has time for that when they’re going to have a good time and listen to music!)

I did not make the Music Festival for Day One. But, my main passion was Thievery Corporation who was headlining on Day Two. You know how in your car, if you have Sirius, you can set “alerts” to let you know when certain artists or songs come on, and you can set it to auto-tune to that station. Well, Thievery Corporation is one of the groups on my “alerts” list….and lemme tell you, that alerts list has maybe 3 artists on it. So, that’s how excited I was, if that puts it into perspective for you.

I would have never known the fiasco of Day One had I not read about it, because Day Two was a dream. The weather was perfect; anyone from Pittsburgh knows that’s a huge accomplishment to have good weather for an exciting event. The crowds weren’t as big as Day One, which I attribute to the Chainsmokers crowd, but I welcomed the much more relaxed flow. Especially since only a week before, I was in California for the Kaaboo Music Festival (which The Chainsmokers also performed at) and it was way oversold and overcrowded. So much so that we were forced to leave the event early. Womp Womp.

I also did not deal with any of the parking or shuttle woes thanks to Uber. Though I very much like that a shuttle service was available. So, Uber dropped us off at a designated drop-off area and we marched on down to the entrance. The entrance brought on a teensy bit of confusion, since there were different locations for general admission, will call and VIP, but nothing major. I just have a really bad sense of direction. Once inside, we were thirsty (duh) and while I’m happy with almost anything, my friend was bummed about no liquor, unless you were VIP. BUT, it was still a step up from last year because this year there was wine. Maybe next year everyone can have access to liquor, who knows. Oh, but there were, however, two Skyy Vodka gals there though giving out free shots of a watermelon vodka of some sort, so we took advantage of that (again, duh).

I love that this festival has two stages with only one band playing at a time. This way, there’s no conflicts of interest and you can hear the band playing from anywhere on the festival grounds. And there’s no long waits in between the bands because the next one is already setting up on the other stage. Ty Dolla $ign was supposed to perform, but sadly had to cancel due to a death in his immediate family. But, there was lots to check out besides the music. There were vendors set up selling different items including clothing and coveted flower crowns. Rivers of Steel Arts created live iron pours. The Wheel Mill Stunt BMX team put on a show. There was even a tent with a virtual reality simulator to check out.

Metric put on a fantastic set and wowed us with some of their best songs. Here’s a video of “Breathing Underwater” from Shawn Glass on YouTube:

When it was getting to be that time (Thievery Corporation), the place was noticeably and expectedly even more crowded. I can’t even express how excited I was to see this group that’s been together for over 20 years and yet this was their very first time performing here in Pittsburgh! Their set exceeded mostly everyone’s wildest expectations and hopefully it doesn’t take them that long to come back! They were the most perfect close-out for a sensational Thrival Festival.

After their set, everyone wafted around seemingly walking on clouds. And then suddenly…something more happened. Over yonder, music started playing. The strange but cool artsy thing that everyone had been looking at all weekend sprung to life. It was the Squonk Opera! And what…pray tell, is that?

Squonk Opera is a group of interdisciplinary performing artists from Pittsburgh, Pennsylvania. Led by artistic directors Jackie Dempsey and Steve O’Hearn, Squonk Opera’s shows consist of music, visual art, and acting elements in an attempt to make a form of opera accessible to all people. The group “like to think of ourselves as a wacky, provincial opera company,” says Dempsey, who named the group “Squonk” after a description of a jazz saxophonist’s playing as a “squonk-fest”, rather than the legendary creature of the same name. — From Wikipedia

Check out this little tidbit video of Squonk Opera performing from their Pneumatica show:

I’m so glad that Pittsburgh keeps moving up that cultural ladder and bringing more and more awesomeness, especially in the music department. There’s always going to be little hiccups but this festival was overall a huge success and I can’t wait to see what next year brings!

(P.S. I’m sure I’ll think of more suggestions, but I’d love to see Lotus come perform next year! — Here’s a video of them performing “Anti-Gravity” at the Summerdance Festival in Ohio this year!)