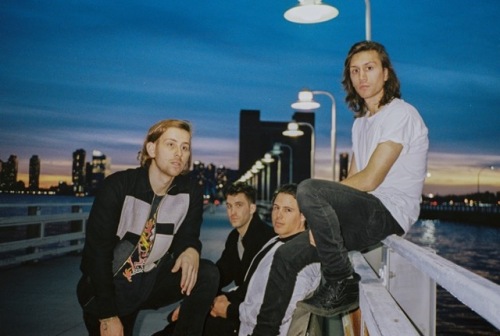 Alt-rock band Late Night Episode gives the world a taste of their forthcoming EP with new single, “Talk About Love.” To date, the band has released one official self-produced single, “Swim” and an acoustic demo of “Lost In Cali.” Both releases have established a steady online presence that caught the attention of producers Shep Goodman and Aaron Accetta of Dirty Canvas (American Authors, Young Rising Sons) who signed the band in late 2016.

Once praised by Billboard for their signature version of “rowdy rock,” and having received comparisons to ‘Kings of Leon’ by The Music Ninja, Late Night Episode is just starting to prove their ability to attract audiences from all genres. In fact, in addition to producing their own music, Late Night Episode have also executive produced Topaz Jones’ critically acclaimed soul-funk record, Arcade.

Of “Talk About Love,” Lonner proclaims: “The name Late Night Episode is a nod to high school nostalgia and the song is about learning how to grow up – though I still have a bit to do, it was written in my parent’s basement.”

Just released today is another new track “Golden Age.” The band has received previous acclaim from Billboard, Nylon and Pigeons and Planes. Their new single for this video is set to be added to Spotify’s New Music Friday playlist, as well as being on rotation on Sirius XM’s Alt-Nation.