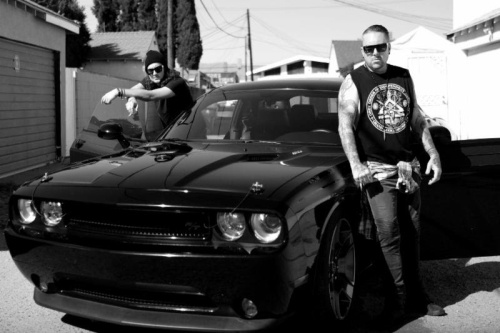 Their mission is to draw upon influences of the past and fuse them with the sound of now. This fusion has a powerful reaction, like the recoil of a gun, firing out lyrical content like bullets of self-awareness and knowledge. They blend Stary’s gritty emotional vocals and driving beats with Pavur’s solid rock guitar riffs. A compilation of 11 songs, Freedom/Freewill is an exploration of blues, rock, and electronic music that uses heavy anthemic chants layered with harmonies.

Both, Fingazz and Pavur, met in 2011 while working on a project for Interscope Records. Fingazz is a platinum award certified hip-hop producer best known around the globe as one of the few masters of the “talkbox,” which has been featured on records by Snoop Dogg, Mike Posner, Far East Movement, Flo Rida, Tyga, Bryson Tiller, Just Blaze, and many more.  His sound can be described as “Future Funk” and his song “Winning” won on So You Think You Can Dance.

In contrast, the New Orleans-born Pavur is a rocker through and through. He has recorded and produced countless up and coming rock acts from his own Los Angeles studio, Golden Beat Recording. Currently, he is an engineer at the historic Valentine Recording Studios as well, working with acts like Lana Del Rey and Eagles of Death Metal. During their time at Interscope, the two lived together in a Hollywood Hills music collective. They immediately hit it off and began working together with an intense focus to fuel the world with a new alt rock sound. Enter: Colt.22.

Another track, “Find Your Pride” has been featured in the promos for Showtime’s show Billions.