Care For The Caravan

Two events taking place over three days and covering 507 miles, #CareForTheCaravan will work to amplify this humanitarian crisis, mobilize grassroots support and bring critical aid to those in need at the southern border. Essential items will be collected (listed below) as well as monetary donations and clothing to be delivered to refugees and immigrants in need at the border near McAllen, TX.

The donation drive kicks off May 18th at The Granada Theater in Dallas, TXwith a concert and appearances featuring The Polyphonic Spree, Cure for Paranoia, and Cry Havoc Theater Company. Proceeds from ticket sales and additional donations will go toward purchasing more supplies and delivery costs. Tickets are $15 per person and can be purchased via this link.

OnMay 19 Still Austin Whiskey Co. in Austin will host a sister event emceed by honored anchor/reporter and author, Olga Campos Benz, with Tiarra Girls performing. In addition to collecting essential items on site, Austin Whiskey Co. will donate 10% of the event’s sales to the cause.

Donations can be made via PayPal (donate button here).  In addition, it’s strongly encouraged to bring one or more of the items listed below to these events as they will be delivered directly to those in need upon #CareForTheCaravan’s arrival at the border.

All donations will be collected and loaded onto the#CareForTheCaravanTruck at the Dallas show. A sister event will also collect donations at Still Austin Whiskey Co. show on the following day, May 19th. Voter registration booths will be available at both events.

On May 20th the #CareForTheCaravan truck will arrive in McAllen, TX. The Buffalo Tree crew will spend the day volunteering and helping to distribute items.

Refugees and migrants are arriving at our borders, often times having fled unimaginable atrocities. These are families fleeing violence and poverty from Central America and they need our help. Immigrants make America great.

Requested items include (new items only):

“Feel It In Your Guts” – Thurston Moore & Bernie Sanders

Joyful Noise Recordings recently brought together two inspiring individuals for a very special release: a brand new composition by Thurston Moore, created in collaboration with the Bernie Sanders campaign. Titled “Feel It In Your Guts,” the track is a twelve-string acoustic piece laced with excerpts from Bernie Sanders’ speeches, touching on topics like the worship of money, economic inequality, social justice, and the need for basic human rights for all people.

“Feel It In Your Guts” is limited to 1000 hand-numbered copies on square, white flexi-disc vinyl. All records are given away for free to those who make individual donations to Sanders’ campaign. More details here.

Throughout his political career, Sanders has been a strong supporter of the arts. “You have my promise that as President, I will be an arts President,” Sanders said in a video recorded for the Arts Action Fund. “I will continue to advocate strongly for robust funding of the arts in our cities, schools and public spaces. Art is speech. Art is what life is about.” 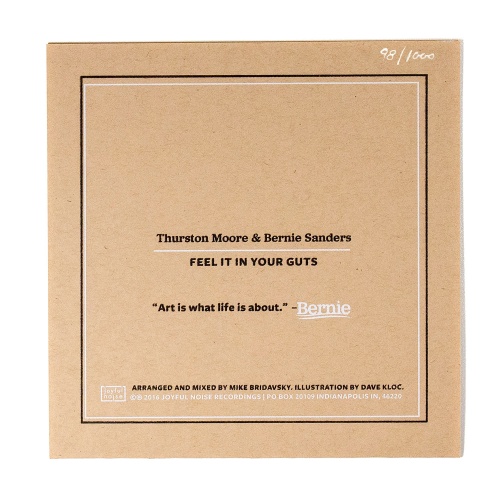 Bernie Sanders inspires us. In a political and business climate which is increasingly self-interested and money-driven, Bernie Sanders alone remains uncompromisingly focused on the issues that affect 99% of us. Which is to say, he’s talking about the things that will improve the lives of ourselves, our families, and basically everyone we have ever met. As the only presidential candidate who refuses bribes from big business, his agenda is unswervingly focused on the people over special interests. As Bernie himself has said, “The reason why we are doing well in this campaign is because we are telling the truth.”

We at the label were inspired to support the campaign, and we thought it would be best to use our curatorial talents to this end. Being a weird-o indie rock record label, we are fortunate to work with a variety of incredible musicians; including, on occasion, the great Thurston Moore. So we decided to ask him. And we were delighted that in a matter of minutes after posing the idea, Thurston excitedly agreed.

Next: the task of getting a major presidential candidate involved. Fortunately, one of our employees was already friends with the good folks of the Bernie campaign, so we reached out. Amazingly, the Bernie campaign responded, and within a week or so, we heard that Bernie himself was into the idea. The amazing folks at the Bernie campaign have worked closely with us to make this crazy collaboration a reality.