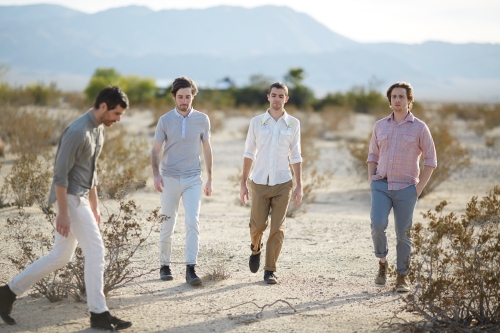 Friends since kindergarten, the members of Incan Abraham (Giuliano Pizzulo, Teddy Cafaro, Spencer Mandel) channel their fingerpainted past in their debut LP, fusing Lost Boys tribal energy with guitar, synth, and harmony vocal soundscapes that arc and circle like bikes in desert washes. After spending college marooned on opposite coasts, the friends reunited on a whim in a secluded house in upstate New York for a weekend that turned into a month spent writing music and contemplating their shared histories of childhood escapism and pop nostalgia.

Returning to their native Los Angeles, they seasoned their sound in the arid air and eclectic east side music scene, until a fateful encounter with their producer-to-be and sonic sherpa Lewis Pesacov (Best Coast, FIDLAR, Fool’s Gold).  The resulting album Tolerance will be released on April 8th on White Iris Records.

The foursome is set to tour starting February 9th in San Francisco and share their upcoming album in a live setting and will play multiple times at Austin’s SXSW.

One response to “Check ‘Em Out: Incan Abraham”