The Wall Street Journal dubbed musician Salme Dahlstrom a “music licensing queen” when, like Moby before her, she managed to license every track from her 2008 album The Acid Cowgirl Audio Trade to various corporations and television programs.

At the time, Dahlstrom, who produces, performs, edits, and mixes all of her tracks herself, was not only just getting noticed, she was just getting started. “C’mon Y’All,” one of catchiest numbers on an album of catchy numbers, climbed Billboard’s Dance Chart and eventually received prominent placements in major ad campaigns for CoverGirl, Suave, and Kellogg’s that ran on primetime network television for months.

While managing what inevitably became a highly successful licensing business, Dahlstrom continued to do the work that got her there, and will now release “Pop Propaganda Volume 2: Retro Funk Soul Junction” on September 16th, 2014.  The new six-song collection is preceded by the single “Pop Ur Heart Out” – streaming now via Entertainment Weekly which calls the song “relentlessly hooky and ridiculously accessible.”

About “Pop Ur Heart Out,” Dahlstrom says, “I felt like bringing some soul and poetry to the party.  I used organic instruments – piano and acoustic guitar – and mixed them with glitch effects and Kaoss Pad to give it an electronic edge. It’s one of my new favorites!”

“Pop Propaganda Volume 2: Retro Funk Soul Junction” by Salme Dahlstrom is scheduled for release on September 16th, 2014 via Kontainer Music.  The first single “Pop Ur Heart Out” arrives on August 5th, 2014, accompanied by a trio of remixes of the track by SpekrFreks, DJ Phunkae, and Quadrat Beat on August 26th, 2014. 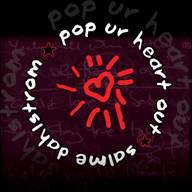