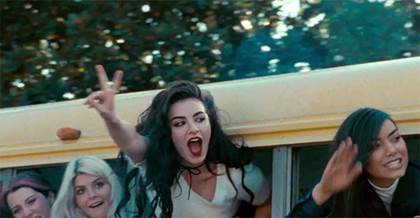 “Charli XCX and her pop-perfect hooks have been just a little busy for the past two years, propelling artists like Icona Pop and Iggy Azalea up the charts. Now, after the success of “I Love It” and “Fancy,” it’s Charli’s turn to do some hit-making of her own.” —USA TODAY

“If her new song is any indication, ‘Sucker’ could be the British star’s breakout album that ushers her proper arrival.” —THE FADER

If Charli XCX’s 2014 had ended yesterday it would have been an unequivocally successful year for the singer/songwriter, but there’s still three and a half months to go, and today, Charli put another notch in the win column with the release of “Break the Rules” — one of the most straightforward songs she’s ever recorded, and one of the best. There’s some Joan Jett in here, and some Skrillex, and it’s fucking awesome. —STEREOGUM

Coming off an exciting weekend at the 2014 MTV Video Music Awards, where the 22 year old singer + songwriter performed her smash single, “Boom Clap” during the pre-show and scored five nominations for her two summer hits (including “Fancy” which she co-wrote with Iggy Azalea); Charli XCX drops a new video for her latest single, “Break the Rules” arriving on her sophomore album, Sucker out October 21st via Neon Gold/Atlantic Records.  The video accompaniment for the sweet rebel anthem features cameos from Rose McGowan as well as gal-pal Kitten front-woman Chloe Chaidez, catch the prom scene here:

“I was inspired by movies like” Jawbreaker” and “Carrie” for the “Break the Rules” video. I never went to prom when I was at school so this was kind of me living out my weird fantasy of what prom would be like in my head. I asked Rose McGowan to be in the video and I never ever thought she would say yes, but she did… so she came to prom too… And she trashed it ;)”

Over the last 18 months Charli’s rise to international pop stardom has been nothing short of meteoric. From releasing her dark-pop record True Romance in 2013 to a wealth of critical acclaim, Charli has toured the globe with the likes of Coldplay and Ellie Goulding, written and featured on one of 2013’s biggest hits “I Love It” with Swedish duo Icona Pop, co-written and featured on the global, four million-selling hit “Fancy” with Iggy Azalea, scored a UK and US Top 10 hit with “Boom Clap” + more.

“Boom Clap,” “Fancy” and “I Love It” combined have sold over 14 Million copies worldwide.