“With a summer soundtrack like this, we don’t want it to end either.” – The Line of Best Fit

“Light, airy, and a little bit surreal, it’s like a synthpop radio single that’s been put through a taffy pull.” – Noisey

Ennui is the brainchild of renowned Pittsburgh-based musician and producer Jim Doutrich, and has been around in various incarnations since 2004.

The songs that comprise the new album, Telepathic Beat, stand out in style and substance, as roller-beats immersed in a bath of shimmering neo-shoegaze, creating a widescreen backdrop to act as home for brain-embedding melodies and subtly haunting lyrics.

With its sun-drenched feel, the album plays as the soundtrack to a summer spent balancing a narcotic life in clubs, with the possibilities that await when you skip work and head to the beach. It’s destined to be the album to reach for when you don’t want to admit that summer is over.

Telepathic Beat is Ennui’s debut for Mush Records and is nothing short of a rebirth for the band, with mastermind Jim Doutrich honing his infectious brand of synth-pop. The playfully yearning vocals, syncopated synth patterns, and distorted Euro-dance grooves bring to mind both ’80s new wave pop, and the youthful nostalgia of recent releases by glo-fi re-originators. 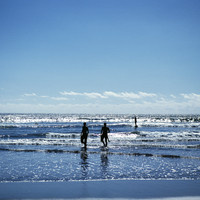