Check Her Out: Alissia 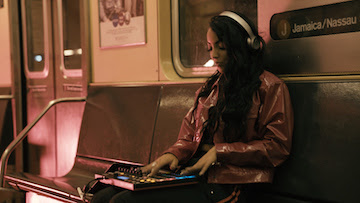 Multi-disciplinary musician Alissia is making her debut from behind the boards as a producer. The funk and R&B-tinged “Get Away” video is out now — with the full support of Alissia’s number one fan, the inimitable Bootsy Collins, who raves, “I’m digging Alissia’s new song because it makes me want to pull up a chair and sit with you, baba!”

This young woman has enough talent to have been called to produce, play bass, write and arrange on Bootsy Collins’ upcoming album World Wide Funk, also featuring the likes of Kali Uchis, Bernie Worrell, Big Daddy Kane, Doug E Fresh and Musiq Soulchild. “Working with Bootsy has been an incredible journey and definitely a challenge to push myself harder everyday. Definitely one of the most inspiring projects I have worked on. ‘You got to keep it funky at all times Baba!’”

In addition, Alissia has also been in collaboration with Khalid, Q-Tip, Anderson Paak, Havoc, and more. Given the company she keeps at her Soho-based studio dubbed “The Spaceship,” it’s certain that this young bass prodigy-turned-producer is primed to begin the next chapter in her musical career.

Her latest track “Get Away” carries listeners from hip-hop to disco to funk and beyond. The mood is chill and the groove is locked. Expect more from Alissia this year; whether solo, collaborating with the greats, or teaming up with new talent, she consistently proves that whatever music she creates just feels right.