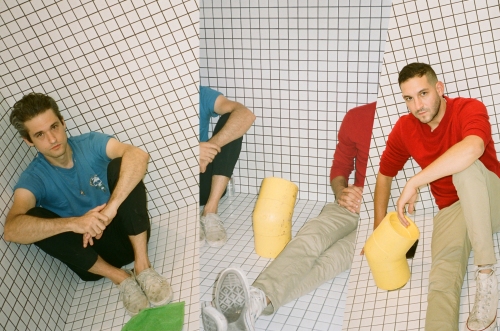 Available for pre-order today, Work features the brand new song “Escape From Los Angeles”(out today) plus previously released songs Anxious” and “Epton On Broadway (Part I & Part II)”. It follows the group’s two previous albums, 2013’s Dynamics and 2011’s eponymous debut (both via DFA) and isfirst full-length LP to come out on the iconic West End Records label in more than 30-years!

A return to the heady ethos that drove Holy Ghost!’s earliest releases, Work sees New York City natives Alex Frankel and Nick Millhiser revisit the freedom from expectations that suffused their 2011 self-titled debut full-length. It was a situation that stemmed partly from circumstances: They dismantled their basement Brooklyn studio and moved to a small room that a few musician friends were renting above a doctor’s office (incidentally the same address where they mixed Holy Ghost!). Due to space limitations, they pared their extensive gear collection down to just two synths, a Yamaha CS80 and a Mini Moog. “Not necessarily the bare necessities, but what would make for the most interesting limited palette,” says Millhiser. “David Bowie didn’t have every fucking synthesizer on earth to make Low. He had two. And that’s one of my favorite synth records of all time.”

The 12-song collection features the buoyant but bittersweet, “Do This” which interweaves ambient chatter from a studio session with a Nile Rodgers-esque guitar, “Nicky Buckingham’s” Fleetwood Mac-inspired riffs and swelling strings are eerily danceable, whereas “Heaven Knows What” – the band’s slowest track to date – showcases an emotional depth and range only hinted at in past releases. Featuring the talents of musical peers including Sinkane’s Ahmed Gallab, Juan Maclean and LCD Soundsystem’s Nancy Whang, Rob Moose (Bon Iver, Paul Simon, David Bowie) and Alex Epton (Neon Indian, David Byrne), Work transcends its physical constraints to capture a spectrum of vibes that remain true to Holy Ghost!’s reverence for the art and craft of dance music.

Epton on Broadway Part I