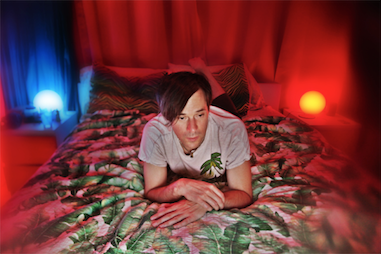 of Montreal is back, and on UR FUN, Kevin Barnes is more candid than ever. The public diary that started with classic album Hissing Fauna, Are You The Destroyer? and earned love from The Guardian, Pitchfork, NME, SPIN, etc. has continued into a growing string of increasingly personal works. After several albums recorded with collaborators and various band members, Barnes opted to record this one completely alone. In his home studio in Athens, Georgia, Barnes isolated himself in creative hibernation, working obsessive 12-plus hour days arranging manic synth and drum machine maps on a computer screen with bouncy, melodic basslines, glam guitars and layered vocal harmonies. The result is ten concise electro-pop songs that expose the depths of his current life, his private thoughts (both optimistic and brooding) and his passionate relationship with songwriter Christina Schnieder. Check out the new track “Peace To All Freaks” below.

Tagged as electro pop, Kevin Barnes, new album, Of Montreal, Peace To All Freaks, Ur Fun

Brisbane electronic group MTNS has been trickling releases from their Like A Stone EP for a few months now, and today the full EP is here. Their biggest hit “Slow Motion” has now racked up over 17,000 SoundCloud plays with “Waves” also pulling healthy numbers. The EP was recorded in LA with brothers and good friends of MTNS, CAMBO and Louis Bartolini.

“Our time spent in California was inspiring. It was an amazing experience getting involved in a music scene outside of our own,” MTNS said.

The songs are inspired by their families, friends, and faith, and for a lyrical perspective, they are based on a reflection of life from hindsight.

“These songs reflect the joining of our histories and differences. Through the process of building this EP we’ve learned a lot about collaboration in music and experienced first-hand its power to bring people together,” MTNS said.

The MTNS soundscape has developed since their first EP Salvage three years ago, stepping away from the computer and using natural elements to blend in with the electronic productions.

“A big part of our new development was experimenting with sounds and attempting to bring the ‘live, natural and band feel’ to the electronic scene. Our first songs were all based 100% on the computer, so it was great to get out of the box and manipulate natural elements by blending them with the electronic sounds,” MTNS said.

Two new songs on this EP are “Aes Sedai” and “Like A Stone”, each rounding out a cohesive pop-electronic vibe. There’s angst and drama across the four tracks, which hit you hard and strike with every synth clash.

This newfound sonic direction for MTNS is a promising step forward in establishing themselves as major players in the music space, and will hopefully inspire others to follow suit.

“Our hope is that anyone listening to our music will feel inspired to create and connect in the same way we have,” MTNS said.

Like A Stone EP is available everywhere now including Spotify & Apple Music.

“Some people just don’t have very good luck when it comes to love. Los Angeles-based pop artist iamBADDLUCK is one of them, but instead of lamenting her unfortunate romantic karma, she owns it,” Popcrush‘s Erica Russell wrote on Thursday. “The witchy singer-songwriter—whose stage name was born of a desire to find catharsis over her bad dating habits—may be hexed when it comes to her love life, but at least her misfortune makes for some seriously bewitching pop.

“Sweeping, melodic and just a pinch creepy, (her) heartbreaking electropop requiem chronicles the artist’s aching desperation for a previous love that has since crumbled to dust, even as she enters into a lukewarm new relationship.”

“My music is a personal invitation for everyone to see the absolute shit show that is my love life,” the singer, who recently signed to iconic Cherrytree Management and has written for artists like Cher Lloyd, told Popcrush. “I was going through a breakup when I wrote this single. ‘Nothing Compares’ came from a moment in a past relationship where I wondered if I would ever love this person the way I did my first love.”

Check Her Out: Julie Elody

After spending three years as a lead vocalist in a funk-rock band, Julie Elody is excited to find her sound as a solo artist, working with several renowned producers. Check out her first solo track, “Sirens”. The indie-electro track is accompanied by Julie’s captivating voice and a subtle yet soothing sound of sirens in the background.

“I don’t like to write about frivolous things, and ‘Sirens’ is no exception,” Julie explains of her new track. “It is about the all-too-often times that we ignore problems in our lives instead of dealing with them head-on, and all of the ways that this affects us.”

With soulful vocals and meaningful lyrics, Julie promises to use her voice to make a statement. She has been the featured vocalist on a few electro-pop tracks, all which gained high success on both Soundcloud and Spotify. She embodies the style of popular music without singing about meaningless partying and how much she wants to be your baby. Conversely, Julie writes songs about issues that are important to her. In her song, “Mountain Lion”, she talks about her struggle with anxiety. “Pennies” is about how the over-commodified society we live in can be detrimental.

Another New One From Dragonette: “Body 2 Body”

On the heels of 2014’s acclaimed full-length Bodyparts which landed them a captivating performance on Good Morning America as well as collaborations with Kaskade, Galantis, Big Data, Martin Solveig among others, Canadian electro-pop trio Dragonette have made a valiant return with their fourth studio album Royal Blues to be released worldwide on November 11.

Strapped with a joyous energy yet tinged with melancholy undertones, the record is perfectly timed to keep listeners warm while the winter months creep in. “Body 2 Body” is a bass-driven silky lovesick banger that touches upon the universal struggle of letting go. Directed by Alison Honey Woods with dance and improvised choreography by Alex Crenian and Miles Faber, the “Body 2 Body” lyric video is posted below for you to check out.

Royal Blues is an irresistibly hook-laden, dancefloor-ready celebration of wisdom that only comes from life experience. To celebrate the release, the band will embark on a 22-date North American tour making stops in Boston, LA, Chicago, Portland, Toronto and more. Be sure to catch the powerhouse pop trio live in a city near you!

Just recently we were treated to an impressive debut single from a newcomer out of Tasmania who goes by the name Calypso. The track was called “Numbered” and it was said to be just the first taste of her upcoming debut self-titled EP. Here’s the video in case you missed it:

The EP is a combination of old and new material. Calypso began writing some of the parts a few years back when she first began experimenting with electronic music. Over time these ideas grew and evolved as her influences changed and she discovered more about her own musical direction – she’s also been busy releasing music as one-half of SLOW. This year Calypso felt she was ready to make a decision on the final selection of songs, which she then sent through to a producer known as KOWL to help get them polished-up and ready to release.

“I suppose the main themes behind the EP would be growth and change…whether that’s within a relationship or within oneself. I think it’s a reflection on how life is constantly moving, and you have to adapt to your surroundings and learn how to survive through the changes.

The EP is also about the push & pull of love, how we can connect with other people and how we can move apart from one another as well. I hope the EP can take the listener on a bit of a journey, as they connect and relate to the words and the music through their own personal experiences” – Calypso

Calypso has indeed delivered an impressive debut collection of tracks, showcasing her strong indie-electronic/electro-pop sound as each track explores the intricacies of relationships; the happy beginnings, the excitement throughout, and sometimes the inevitable end.

The EP is also available from iTunes and Spotify if that strikes your fancy.

Filed under Awesome, Check 'em Out!

Melbourne singer-songwriter Myami has released her official film clip for debut single “Soldier“. The track, produced by beatmaker and collaborator Wayfarer//, has enjoyed nods of approval from online publications including Complex, Pigeons and Planes, and other internationally reaching blogs. The single, and subsequent video is largely based on themes of being a female going into the music industry, communicating the weight of the fears and expectations she has, as well as working out how to navigate the ins and outs of the industry.

It begins in a white pristine room, paying reference to a new beginning and clean fresh start.  The black paint symbolises the entrance of her own, and other people’s expectations, contributions, opinions and rules. Through the clip MYAMI is very aware of their presence and grapples with the combination of her own vision and the constant flood and permanency of black.

Progressively, she is able to figure out how to make the industry and her vision work together (as shown in the neon scenes) – thus forming the branding of MYAMI.

This past January, Nashville-based artist Ruelle released her debut EP, Up In Flames. The EP is a collection of dark, electronic-pop songs written and recorded specifically for TV/Film.  After her haunting songs began finding their way onto television shows and films like The Loft, The Slap, Revenge, The Originals, Sleepy Hollow, Reckless, and DaVinci’s Demons, Maggie Eckford decided to bring them all together in an EP under the new artist name, Ruelle.

Dark pop outfit Radclyffe Hall have released the second single, “OMG”, off their forthcoming full-length debut. Following up to their premiere single “Dare to Dream,” “OMG” exhibits Radclyffe Hall’s continued exploration of dark pop, both in music and lyrics.

Earmilk describes “OMG” as having a dark pop feel with “menacing and synthy 80’s stylings,” noting, “Because some people are always leaving, whether physically or within their own minds, and when you realize it that is the “OMG” moment that you dread and a feeling you can’t shake.”