New Music From The Struts – “One Night Only” 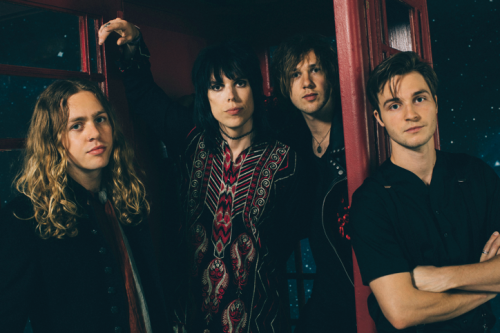 Acclaimed UK rock band The Struts release “One Night Only”, the new single out on Polydor/Interscope Records. “One Night Only” is the first piece of music to be revealed from the band’s forthcoming album—the highly anticipated follow up to their 2016 debut Everybody Wants.

Of the track, lead vocalist Luke Spiller says, “This song is mainly about the relationship between a performer and his/her audience. After touring throughout the United States, we’ve developed a strong relationship with our audience and started to feel more responsibility to them—mainly to give a great show every night. The song has many theatrical moments, making the arrangement one of the most ambitious songs we’ve done. It’s definitely over the top and larger than life, but after experiencing our audience and how they react to our music, I think it’s even more fitting.”

The band has been touring nonstop since forming including worldwide headlining shows, prestigious festival plays and support slots for The Rolling Stones, The Who, Guns N’Roses, Mötley Crüe and The Killers.  The Struts will now be opening the first leg of Foo Fighters’ autumn tour across the US – see full dates below.

“The guys are on course to be one of the UK’s biggest rock bands. ‘Everybody Wants’ is a real contender”  – Daily Star

Recorded on a red lighthouse boat, moored at Trinity Bouy Wharf in East India Quays, the eagerly awaited debut from London four-piece Telegram is set for release March 18 via Red Eye. Operator is a series of frenzied meditations on Time and Speed, steeped in the sensitivity and strangeness of Kurt Vonnegut and approached through the erstwhile themes of love and intoxication. Melding post industrialist kraut rock with garage rock and the best bits of Eno and Bolan, the album offers twelve luminescent tracks, rooted in solid grooves but anti-gravitational in your mind’s eye.

Lead single “Taffy Come Home” is the album’s totemic standout. The video accompaniment for the track, which premiered on BrooklynVegan, was produced by Douglas Hart (an original member of The Jesus & Mary Chain) and is featured on Q Magazine. The track is the biggest pop song on the record, it is also – quixotically – the most personal, and the best demonstration of lead singer Matt Saunders’ supremely lyrical style. His lyrics share their despair, as well as their radical optimism and their pugnacious approach to the world’s harshness. For ears that have come across Telegram and stayed attuned, singles “Follow” and “Aeons” astound a second time, licked in a fresh coat of blinding enamel, alongside live favorites “Folly” and “Regatta”. Rerecorded, they’ve been elevated through work on the minute details.

Formed almost spontaneously in 2013, Matt Saunders (vocals, guitar), Oli Paget-Moon (bass) and Matt Wood (lead guitar) were repeatedly drifting together in kitchens, living rooms and makeshift studios. With whichever party it was reaching a certain depth and pressure, they decided to cut against the drift and commit their shared time to history in musical form. Wunderkind drummer Jordan Cook was recruited and, with a blistering run of shows, the band became extraordinarily tight. Moreover, they were made sensitive to the subtleties and extravagances of good performance. Once the album was recorded, Pip Stakem took over lead guitar and the band is now set to embark on a string of UK dates. Telegram will then be bringing their dynamic live show to Austin for SXSW 2016 as well as New York City on March 24 at Pianos to celebrate the release of the album.