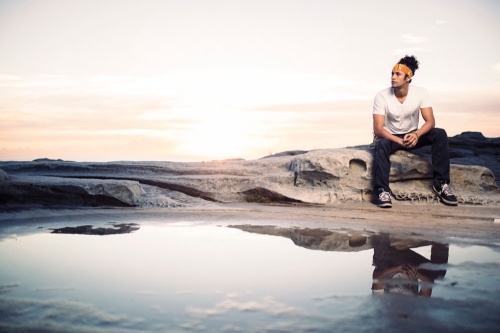 Drawing on a love of Afrobeat, blazing horns, electronic beats and soul, Daybreak is a cultural feast for the ears and mind. Honoring a vast range of influences from Jamie xx, Fela Kuti, Hermitude, D’Angelo, Bonobo, and Fat Freddy’s Drop, Klue delivers on recent editorial predictions dubbing him as an ‘Artist to Watch’ in 2016.

“The Soul and Southern African tunes were on living room rotation as a kid and that definitely shaped me musically and how I create.  Having developed my production skills in the hip hop and electronic world, I feel like this is record is the first time I’ve managed to bring all of these influences together in a cohesive way, and in a way that really feels right.”  – Klue

Written in part, while touring Africa with his band True Vibenation, Daybreak encompasses some of the spirit of the trip. Specifically working with a variety of musicians, be it professionals backstage at a gig, amateurs, even a barber shop group he jammed with on the street. All those moments helped to influence the overall sound of the EP.

“When I got back from Africa I got to work turning some ideas and drafts into what could possibly be a solid record. During this time I was surrounded by great people and was having a really good time. I had some pretty incredible nights out, and I was catching my fair share of sunrises too” – Klue

The Daybreak EP turned out to be quite a huge process for Klue as he set out to do almost everything himself; he wrote, played, recorded and mixed everything on the EP, aside from the trumpet in “Hiding” which was done by his True Vibenation band-mate Moody, and the mastering which was handled by Sameer Sengupta. In the end, Klue had a four-track collection of tunes that he was really proud of, and couldn’t wait to share with the rest us.

“Daybreak is a pretty remarkable part of the day (whether it’s the beginning or the end of your day), and the process of making my first solo record definitely felt like a beginning, and so that’s pretty much where the ep’s title came from” – Klue

Daybreak EP is available now through etcetc music, and Australian fans can catch Klue as he tours around the country throughout May/June, which also includes a few co-headlining shows with Ribongia in Wollongong, Melbourne, Sydney and Newcastle.

Klue will then be heading to Europe in late-June to perform at Glastonbury Festival with his band True Vibenation, and you can rest-assured that there will be a few impromptu Klue shows and after-parties happening throughout Europe during that time.

Chase and Status has just released the video for “Lost & Not Found” (feat. Louis M^ttrs), filmed in California, which is the first single to be taken from their eagerly anticipated upcoming third album. The “Lost & Not Found” single will come with remixes from Dream McClean, Kove and Josh Butler, and will be available June 30th via Casablanca Records, right after Chase and Status headline the Other Stage at the world famous Glastonbury Festival.

Casablanca are also proud to announce that Chase and Status has recently been added to the Rock The Bells tour that will see the guys (and some special guest vocalists from the new album) play San Bernardino, San Francisco, Washington DC and New Jersey in September/October. Widely known for its unrivalled hip-hop line ups, this is a unique and exciting opportunity for a largely electronic act like Chase and Status to play alongside the likes of Tyler The Creator, Common, Talib Kweli and Wu Tang Clan: epitomizing just how varied and genre defying Chase and Status really are…

On “Lost & Not Found,” Chase and Status give a nod to the early 90’s rave era that inspires them, the single shows a change in direction for the duo and gives their fans a glimpse of what’s to come with their new record. Always looking to support unknown and underground talent, as they did with their last album No More Idols (Maverick Sabre, Delilah, Liam Bailey etc), “Lost & Not Found” features the talented new artist Louis M^ttrs.

Chase and Status are undoubtedly one of the most exciting and successful British bands of the past decade. Their double platinum, second album No More Idols has sold over 600,000 copies in the UK alone and spawned over 2 million singles. They were the biggest selling band in the UK in 2011, behind Coldplay and last year were nominated for ‘Best British Band’ at the Brit Awards 2012. They have also been nominated for two prestigious Q Awards, won the Q Award in 2010 for Best Video.