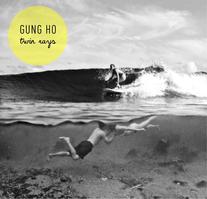 Gung Ho are a three piece indie surf-pop band from Brisbane.  After spending much of 2011 writing and working on new songs they are ready to release their first single.

The band are just about to commence their first east coast tour in support of their first single, Twin Rays, from their forthcoming EP.

In their short time as a band they have supported rad, up and coming acts such as The Holidays, Papa vs. Pretty, Bleeding Knees Club, Comic Sans, Kids of 88, Jinja Safari, and Velociraptor.