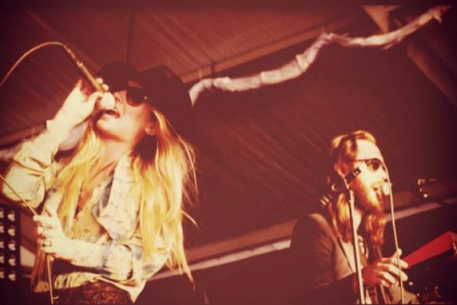 Chicago based duo Wild Belle have announced an extensive fall headlining tour that will kick off September 5 in Madison, WI.  The band recently made their Lollapalooza debut before they headed to San Francisco to play Outside Lands.  After previously touring the states opening for Passion Pit and Toro y Moi, Wild Belle will travel across North America and back for over 25 headlining tour dates -making this their biggest headline tour to date (full list of dates below).  To catch a glimpse of Wild Belle’s life on the road, watch the band’s self-directed video POSTCARDS FROM THE ROAD Nº3.

Wild Belle’s live performances have been recognized for their catchy hooks and infectious sound.  The band took their effortlessly sunny set on the festival circuit this summer with performances at Coachella, Sasquatch, Firefly, Full Moon Festival, Lollapalooza and Outside Lands.  The musical talents of both siblings shine during the band’s live performances, with Rolling Stone noting how “Natalie (breezes) about the stage with relaxed bravado while Elliot (switches) effortlessly between keyboards and sax…creating an organic wall of sound.”

In June the band stopped by a Los Angeles bike shop to record a performance with KCRW of “Love Like This” for NPR’s Field Recordings.  Noted by the Chicago Tribune for their “breezy sounding pop music,” Wild Belle is currently featured in Glamour’s summer music issue and as Time Magazines “Band to Watch”.