“Milwaukee’s Delta Routine can rock the blues and deliver grade-A hooks just as well as any of its contemporaries. It’s no wonder they’ve been receiving plenty of accolades in their hometown”– MAGNET MAGAZINE

“Influenced by the Stooges, the Stones, Kings of Leon, the Ramones, and Robert Johnson, Milwaukee’s The Delta Routine is built upon the raw elements of guitar-driven rock. Singer, songwriter, and guitarist Nick Amadeus creates memorable hooks and quirky riffs all while paying homage to the old days of rock & roll.” – THE PHILADELPHIA INQUIRER

“On its third full-length album, Cigarettes & Caffeine Nightmares, the band serves up 11 fat-free slices of hooky, slithery, and perfectly pitched tunes that wouldn’t be out of place in the early ’00s—or the ’70s that inspired those early ’00s. It’s an unabashedly enjoyable collection from one of Milwaukee’s most unabashedly populist bands. Cigarettes & Caffeine is a big step up from 2011’s More About You, and finds The Delta Routine up to its ears in songs exceedingly well-crafted.” – Matt Wild / THE ONION A.V.CLUB

“I won’t waste your time now,” Delta Routine frontman Nick Amadeus sings with his Liam Gallagher-esque vocals on the opening track. He’s true to his word. At 32 minutes, the album is mercifully low on fat but thrills all the same with warped organ and guitar reverb snarls on “Switchblade.” Likewise, “Around Your Neck” does its bluesy, White Stripes-like, swagger-soaked thing in less than two minutes’ time.”  – Piet Levy / JOURNAL SENTINEL

“If you love a mixture of 60s rock ‘n’ roll, angsty punk and modern day indie, then The Delta Routine’s Cigarettes & Caffeine Nightmares is definitely an album you’ll love.” – SHOW ME SOMETHING DIFFERENT: UK

“Nods appreciatively at the likes of The Rolling Stones, Oasis and The Strokes whilst ensuring they don’t just sound like copycats.” – PLUG IN MUSIC 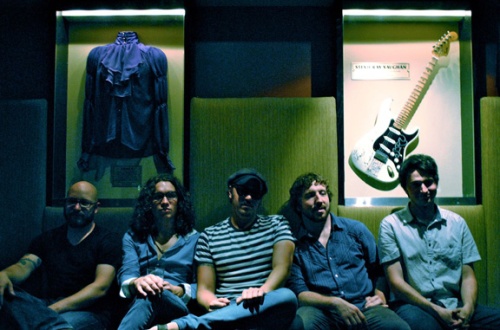