Tag Archives: From the Cradle to the Rave

Speaking about the new release, Shit Robot said: “After the album I just wanted to go back to my roots and make some dance 12”s, music for people to get drunk and jump around to.”

Shit Robot returns with his first new material since the release of his debut long-player, 2010’s From The Cradle To The Rave. After spending much of 2010 and 2011 touring the globe with his live show – including a string of dates opening/performing with LCD Soundsystem during their final shows in NYC – the rebooted Robot is back with The Green Machine. The first result of his Stuttgart/New York studio adventures is a double-header of dancefloor jams, “Teenage Bass” b/w “Space Race,” which will be released digitally and on vinyl via DFA on May 21, 2012.

It’s the first in a series of releases called The Green Machine, which will culminate in an album early next year. Lead cut “Teenage Bass” rides a rude EBM bassline and rave alert sirens, before expanding further with key changing chords and a defining arpeggiator. The hypnotic “Space Race” is a distant relative of 2007’s “Chasm” – a meandering, melodic, star-gazing Robo-techno workout.

Tagged as From the Cradle to the Rave, LCD Soundsystem, Shit Robot, Space Race, Teenage Bass, The Green Machine 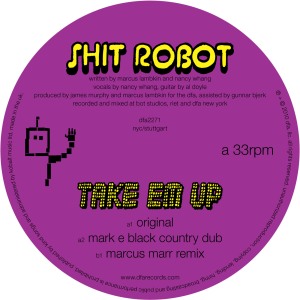 Click to watch the video for "Take 'Em Up"

Shit Robot premiered his new video for “Take ‘Em Up” over at Pitchfork on Monday. The video follows LCD Soundsystem’s Nancy Whang on a multi-colored, multiplied psychedelic voyage around Brooklyn.

“Irish-born Marcus Lambkin (a.k.a. Shit Robot) may be one of the lower-profile members of the DFA crew, but that doesn’t mean the man doesn’t have some serious DJ chops.”
—XLR8R

From the Cradle to the Rave (produced by James Murphy) is a near perfect album, and “Take Em Up” is one reason why. The interplay between Marcus “Shit Robot” Lambkin’s synthesizer disco-funk and Nancy Whang’s unflappable vocals is, simply, great. The album also features other DFA family guests such as Hot Chip’s Alexis Taylor and Juan MacLean.

Shit Robot, aka Marcus Lambkin (aka The Godfather of DFA, according to Murphy), is an Irish-born DJ who has been spinning dance music for over two decades. He’s responsible for not only turning Murphy onto dance music in the 90’s, but also literally lending his carpentry skills to build the infamous DFA studio from the ground up.