Kyla Rae and Vince Nania are Pittsburgh based duo Metacara and today they’ve released their 2nd EP, Car Talks. I can’t really nail down a genre for them because they incorporate many. But, if you’re a fan of Phantogram, Purity Ring, and Wolf Alice (I’m thinking the Blush EP), you will definitely enjoy Metacara. In comparison to their first release in 2015, Stone Love, they feel like Car Talks is more mature. The name of the band itself means, “Many Faces,” which is super cool and appropriate for a group that feels their music is growing as they grow themselves.

When I hung out with Kyla and Vince recently, they told me this EP was inspired by the kinds of talks that you have in the car. You know, like when you’re going on a road trip — you’re in the car for a long period of time, why not talk about something deep that’s been on your mind? And bonus: your travel mate can’t escape you, mwaahahaha.

Check out the video for one of the new tracks, “Pilsen” below:

After you’ve watched that, check out the rest of the EP below via Soundcloud:

When you listen to the title track, make sure you pay attention at the 1:48 mark where the song changes it up a little bit. I love when one song almost sounds like two different songs AND IT WORKS. That’s what happens here. Magical.

“Over the Edge” has a little bit of a darker feel, which I especially appreciate at this time of year. The air is crisp and fall has arrived, Halloween is coming, and I usually feel a teeny bit bitter that the bitter, cold weather is approaching. Sometimes that’s what puts me “over the edge,” not sure about you. Juuuuuuust kidding. Sort of. Anyway, all of the tracks flow very nicely with each other and the EP ends with “Ceilings.” At 1:38, this song brings another beat that I’ve fallen in love with. The sound is blues-y and adds another level of anticipation followed by a rock vibe that carries out the rest of the song. After checking out Car Talks, you’ll see what I mean about nailing down a genre. Maybe I’ll make one up just for them.

The Car Talks EP is available on all major music platforms, so go grab it on whichever one strikes your fancy!

AND if you’re in the Pittsburgh area this Saturday, go check them out for their release party at James Street Gastropub! 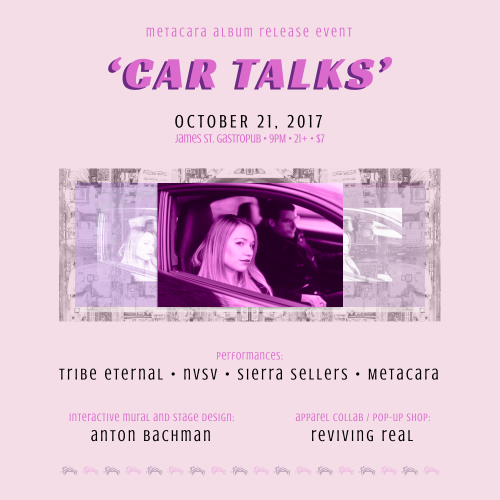