Sometimes inspiration strikes from the immersion of living in a faraway place. Sometimes, inspiration stems from a place that everyone can relate to, but maybe no one’s actually been. This is the music of The Hip Abduction, the vibrant St. Petersburg, FL-based collective that formed over a mutual appreciation for West African and early Jamaican reggae/dub music.

The Hip Abduction began through informal jam sessions and quickly coalesced into a sound that attracted national attention. For Gold Under the Glow, the band’s 2016 third full album release, THA engage an indie pop acumen alongside a highly emotive and roots-driven sound. 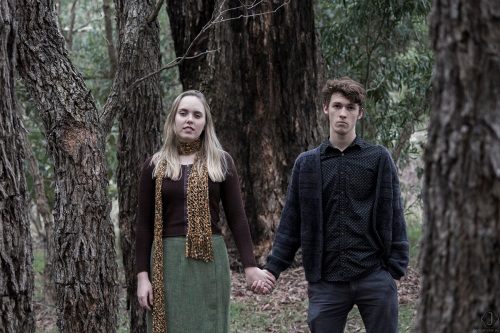 Indie pop duo, Yellow Castle, formed by Peter Money (19) and Emily Matthews (21) from Perth, WA have released their catchy debut single “Restless Creature” into the wild world of music through The A&R Department. Money and Matthews have been in the Perth music scene for a few years recently branching off from Rich King Matthews to become a duo.

“Restless Creature” speaks of the calm at the end of an anxious spiral, where the “what ifs” and fears that keep you up at night, are dulled by the support of those you love, and who love you. The track was recorded and produced by Sam Wylde at Dalkeith Road School of Music, who says of the pair, “they deliver a really nice blend of catchy hooks, clever lyrics and smooth harmonies, a super exciting new band.”

Fueled by dreams, chamomile tea and backing of the ones who mean most, Yellow Castle’s future plans include an EP and global touring. They have already dipped their toes into the music scene with a handful of shows in their hometown and a taste of interstate touring at The Horse in Surry Hills. August will bring them a month’s residency at The Good Shepherd in Perth, a slot at the Monkey Bar in Mandurah and everything else that they can get their hands on. 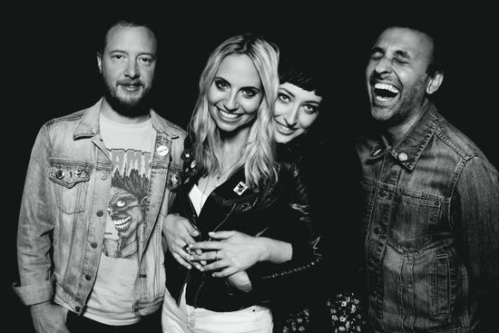 Los Angeles-based indie-pop band Beginners will release their brand new “white-hot scorcher” (Neon Gold) sophomore EP Pleaser on September 16th. A formidable follow-up to their 2014 self-titled debut which garnered over 4 million Spotify streams, numerous TV syncs, and tour dates with artists such as Walk The Moon and Tove Lo, Pleaser features catchy dance melodies with a rock ‘n roll vigor and clever lyrics ranging from feel good to biting. Today, their new single premiered for their underdog anthem “What We Are”.

The sun-soaked indie pop track is “about my childhood in Indiana,” front-woman Samantha Barbera told Interview. “When I was growing up, my mom struggled financially and we were forced to live off of food stamps. Despite being poor in an otherwise wealthy town, she always instilled an impenetrable sense of confidence in me. I still have vivid memories of riding my second-hand bike around my neighborhood, wearing a giant gold medallion from the 70s that I took from my mom’s jewelry box, feeling like I owned the streets. It’s an underdog anthem about being proud of who you are, regardless of what anyone tells you.”
Pleaser is an ode to the thin line between love and hate. Pulsing singles like “Gangsters or Lovers” and “What We Are” leave no choice but to move to the contagious beats and guitar riffs. The Black Keys meet Yeezus in the tongue-in-cheek revenge ballad “I F*cking Hate You” where Barbera’s bluesy vocal melody delivers sultry lyrics with a violent twist. Gritty dance track “Making Love to the Dead” reveals how passion can turn to pain in a soul-sucking industry designed to churn out marketable hits, while hypnotic closer “Melting Into One” evokes the intoxicating power of young love. At first listen, I also immediately heard notes similar to that of Santigold.
Beginners delivers dark garage rock with a shimmery electronic pop veneer influenced by years of cutting their teeth in the LA punk scene. The band’s sound and lyrics ride a line between glossy and gritty, creating hooks that are at once magnetically catchy and unsettlingly honest. Their single “Who Knows” off their first EP launched the band two years ago resulting in buzz from Rolling Stone, Perez Hilton, Huffington Post, and TV syncs on shows including New Girl and commercials for Ray Ban, Skullcandy, and Miller Lite.

Check out this awesome first release from The Dedbtz’ upcoming EP. “How Much I Need U” features rising indie-pop singer BRĒZY, who The Dedbtz reached out to after hearing her on Spotify’s Weekend Buzz playlist.

Tagged as BRĒZY, How Much I Need U, indie electronic dance, indie pop, spotify, The Dedbtz, Weekend Buzz

Must Watch! 360° Video from The Zolas for “Swooner” 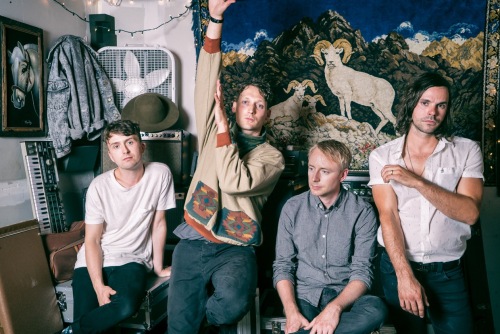 “The four piece pop band from Vancouver are upbeat and undoubtedly having lighthearted fun with their music, and the song is layered in sugary harmonic vocals and melodies for you and your friends to get dark (or drunk) to.” – VICE’s Noisey

Vancouver indie-pop darlings The Zolas have released a cutting-edge video for their fuzzed-out, guitar-driven pop anthem “Swooner”, which just reached #2 on the Canadian Alternative Chart this year. The interactive live video was shot on four GoPro cameras mounted in a special 360° tripod that allows the viewer to pan around the room and explore different viewpoints. Make sure to watch on Chrome or Firefox!

The Zolas’ Swooner LP, released this year via Light Organ Records, dives headlong into vibrant, experimental pop, showcased by stirring modern production, highlighted by flashes of grungy hard-panned guitars, Prince-like synth flourishes, eurodance vocals and electric pianos. The band is heading out on a North American tour in June, including a stop at NXNE Festival and Pemberton Music Festival.

Listen: South of France – “Washed Up”

Denver’s beloved indie-pop duo South Of France have returned to deliver their own compelling sense of style to the music and the fashion world alike.  The band have unleashed their newest single “Washed Up” in conjunction with the launch of their collaboration with cutting-edge clothing brand Akomplice. The collection highlights the band’s affinity for taking control of the many facets of their creative process with their own unique vision.

Both independently owned and operated and hailing from Colorado, South Of France and Akomplice brought their collaboration to fruition through a mutual love of creation. Akomplice owners Mike and Patrick Liberty were impressed after hearing “Washed Up,” and together with South Of France they drew inspiration from Wes Anderson’s cult classic The Darjeeling Limited, to bring to life a capsule collection that includes a duffel bag, field notebook and custom white 45 record featuring the new single.  The collection simultaneously showcases the brand’s ability to transition from the world of hip-hop to indie rock, as well as the band’s penchant and talent for design, both sonic and visual.

Launched by multi-instrumentalist and producer Jeff Cormack in 2012, South Of France, began as a lo-fi garage rock project until Jeff was introduced to Kelly Lueke. Upon discovering their amazingly similar taste in music, the two joined forces  and soon settled into their signature reverb-soaked indie pop harmonies. Their debut LP Another Boring Sunrise was critically lauded and the band have since shared stages with TV On The Radio, Portugal. The Man, Jimmy Eat World and many others. The duo recently married and are hard at work on their next album. Catch them opening for Bob Mould at the Boulder Theater in Boulder, CO on May 7th and be on the lookout for more from the band in 2016!

“some of the most addictive, hypnotizing disco-pop jams you’ll hear” –COMPLEX

“Skulls’ tunes are one part electro, another indie-pop, and a whole lotta soul all wrapped into one package”- THUMP

“He sings, he DJs, he produces, he stuns… Tantalizing disco-inspired harmonies will no-doubt get you dancing”. –VIBE

“Every live Mystery Skulls show maintains a juxtaposition between the energy and grittiness of a DIY show with his infectious and dance-worthy productions and vocals. Forever is a disco house and funk-infused album” – DJ MAG USA

Following some time off after two tours with Cherub, spot dates around the globe, and commissioned remixes, sound architect Mystery Skulls will hit the road in August for a 7 day, 7-city tour run that begins Friday August 21st in Brooklyn and ends Friday August 28th in his former stomping grounds of Toronto. 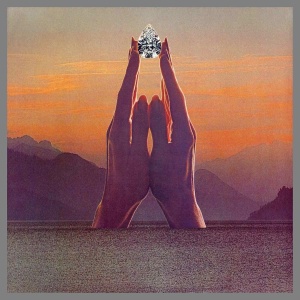 “The band’s previous releases recalled Fleet Foxes and other pastoral-minded ’70s rock, however, it’s latest offering has more in common with the likes of psychedelic contemporaries Tame Impala.” – Consequence of Sound

“Yukon Blonde have built up a catalogue of perfectly crafted pop songs, but their forthcoming album On Blonde has them expanding into a more sophisticated dance rock sound.” – Stereogum

“…dynamic landscapes of psychedelic and synth pop waves that’ll have you ready to go late into the evening.” – Paste

“Yukon Blonde have a special touch when it comes to indie pop.” – KCRW

On Blonde brings the mastery of seamlessly crafted pop songs that has become expected of Yukon Blonde while experimenting with psychedelic, digital, and synthetic sounds. It is an album gazing wistfully away towards the more shadowy elements of pop production, soft synthesizers, thin punching bass lines, and saturated psychedelic guitar effects. The result is a dynamic, visceral, sonically dense record that stays incredibly accessible to the listener.

Revered for their energetic live performance, Yukon Blonde kicks off their U.S. summer tour in July. Catch a special preview of the band live in NYC next week when they headline Piano’s Monday June 15 and Cameo Gallery in Brooklyn on 6/16 (album release day). Full dates listed below. 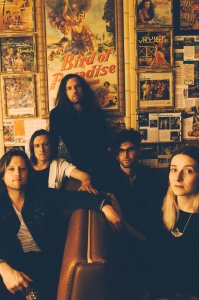 Listen to their EP here

Cold Shoulders began as a friendship between Jordan Witzigreuter of the multi-platinum pop project The Ready Set, Jared Ryan Maldonado of the indie-pop duo Dresses, and Trevor Dahl of pop-rock group Plug In Stereo. Their self­-titled debut EP, was recorded and mixed at home studios from Los Angeles to Portland. Cold Shoulders is a versatile adventure that weaves through electronic ballads, stylistic experimentation, electrifying synth licks, and lyrics to keep you warm. Cold Shoulders is a prime pick; on par with Grouplove and Foster the People.

Their self-titled EP was released yesterday, and can be purchased on iTunes, Amazon, and Google Play.

“an anthem for rebels and rule breakers everywhere.” — NYLON
“…Sneakout exhibits a rowdier side of Fleming’s stylistic repertoire.” — Impose Magazine

Sneakout’s Robert Fleming crafts upbeat, electro-tinged indie-pop with a fun and mischievous vibe, so it’s only fitting that his new video for “The Art Of Hanging On” would feature drinking, partying, and general rowdiness. The twist is in the crew of characters he’s cast: a grandfather and his buddies, eager to teach one lucky grandson how to have a good time. Directed by Andrew Hines, who’s shot videos for A$AP Ferg & The Head and The Heart.

Shedding his previous moniker Victory — whose tracks were featured in national ad campaigns for Cadillac and iPhone & Burberry, as well as HBO’s Girls— Fleming chose to call his new project Sneakout, a name that embodies his values of living in the moment and not taking life too seriously. As an introduction to Sneakout, he put together the Letting Go Mixtape, which features brand new tracks alongside reworkings of some old Victory favorites. You can stream the full mixtape via Soundcloud.