UK duo SSHH is bringing in rhythm sections from Marilyn Manson and The Big Pink for their latest endeavor: the team took on The Big Pink’s classic “Dominos,” and the track and accompanying video are now streaming exclusively via Team Rock. Singer Sshh Liguz and guitarist Zak Starkey, also known as the current drummer of The Who, formerly of Oasis, and son of Ringo Starr, have gathered a full force of legendary rhythm sections for their upcoming full length of covers, titled ISSUES: because all bands have them. “Dominos” enlists Gil Sharone of Marilyn Manson on drums, Twiggy Ramirez of Marilyn Manson on bass, Robbie Furze of The Big Pink on vocals, and was produced and mixed by Nick Launay. 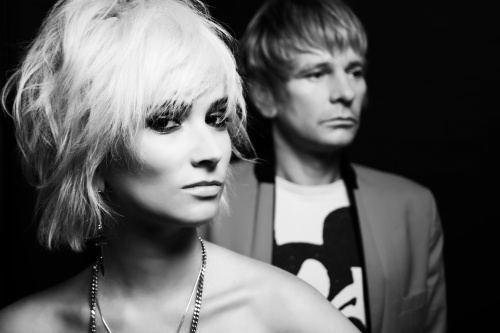 UK band SSHH, made up of Sshh Liguz and Zak Starkey (Ringo Starr’s son and drummer for Oasis and The Who) is teaming up with TONS of amazing musicians (members of Oasis, Sex Pistols, Marilyn Manson, Amy Winehouse’s band, and more) for their upcoming album ISSUES. The album is a collection of covers using the members of the original bands! Heads up — it kicks ass!
The first single just premiered — it’s a cover of Sex Pistols’ “Problems”, featuring Glen Matlock, Pistols bassist, and Paul Cook, Pistols drummer.

ISSUES is a modern homage to all of the epic bands that made SSHH what they are today. The idea behind the record was simple. Zak and Sshh had been asked to do a radio series on SiriusXM, chatting through the music that has influenced them. But why not go a step further? Why not find the original rhythm sections from those bands and play with them? Why not make an album in the process?

The first call went out to Glen Matlock and Paul Cook, the bass and drums, the meat and veg of the Sex Pistols. If they were up for it, everyone would be up for it, and they were.  And thus, during the last week of November in Los Angeles, the project began. Clem Burke, Blondie’s drummer, turned up in the studio on day one to cut an unorthodox “One Way or Another”. Day two, Marilyn Manson’s rhythm men, Twiggy Ramirez and Gil Sharone, arrived for their turn. Fellow musicians Santa Davis and Fully Fullwood (of Peter Tosh’s Word, Sound and Power) also came forward and re-recorded Tosh’s original version of “Get Up Stand Up”, with an added touch from Eddie Vedder.

The duo moved on to London and got back in another studio for “one of the most intense recording sessions of [her] life,” according to Sshh. They began with “Babylon’s Burning” and “Jah War” with the rhythm section of The Ruts, followed by “Back to Black” with Amy Winehouse’s drummer, bassist, and musical director. Darren Moonie and Simone Butler of Primal Scream showed up for a full-on, no-holds barred take on “Shoot Speed Kill Light”. Guests also include Martin Chambers (The Pretenders), Mick Ralphs (Mott the Hoople), and Kenney Jones (The Small Faces, The Who), and production credits include Youth and Ian Brodie, among others. “Of all the people who’ve taught me drums – Keith Moon, my dad [Ringo Starr], all of them – Kenney showed me the most,” says Zak.

Zak and Sshh first came together in March 2006. Zak, playing drums on tour with Oasis, played a guitar riff down the long-distance line, Sshh recorded it, built it, and put it together, and their first track “Jet Engines” was born. Years passed as Sshh was in a different kind of studio as an award-winning visual artist and Zak was touring with Oasis and The Who. In 2008, the pair played a few gigs in East London under various band names, opening for Kasabian. The two eventually settled on SSHH, the call came from Sirius, an idea was hatched, and SSHH had ISSUES.

The result of those two mad, unpredictable, spontaneous, serendipitous weeks of phone calls, new handshakes, old hugs, musical conversations, long shots and crossed fingers is a record which straddles a huge swathe of modern music history. From the original rock ’n’ roll of the sixties through punk, reggae and dub into modern soul and electronica, this is a wild journey in just eleven steps. And despite all that, it exists as its own work, knitted together with the unique sound of SSHH – a fortnight in the making but a decade in its evolution. ISSUES will be released later this month, and proceeds from album sales will go to Teenage Cancer Trust.