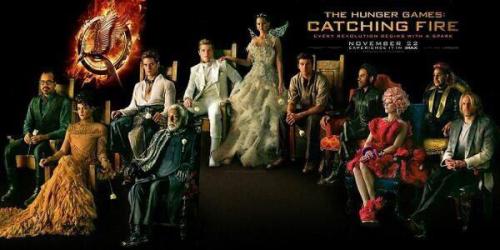 Multiplatinum recording artist Coldplay will release the first track from the official soundtrack album for The Hunger Games: Catching Fire, it was announced today by Lionsgate (NYSE: LGF) and Republic Records, marking the first time Coldplay has ever recorded an original song for a motion picture. The song, titled “Atlas,” is scheduled to be available via iTunes and all digital retailers on August 26, 2013.  Republic Records is again teaming up with Lionsgate to release the soundtrack in advance of Lionsgate distributing the film on screens worldwide on November 22, 2013.

“I have great respect and admiration for Coldplay, and we are thrilled with how well they have connected to the themes and ideas within the film,” said filmmaker Francis Lawrence. “Their unwavering passion and excitement for the project elevated the collaboration even further, and we can’t wait to share this music with audiences around the world.”

“We are so honored that Coldplay, one of the iconic rock bands of our generation, will perform the first song out on the new soundtrack,” said Tracy McKnight, Lionsgate’s Head of Film Music. “Knowing that Chris Martin is a fan of the books makes this even more meaningful.  The Coldplay single underscores the stature of recording artists we’ve assembled for this powerful soundtrack.”

Monte Lipman, Chairman & CEO of Republic Records, stated, “The creative alliance between Coldplay and The Hunger Games franchise will create a level of excitement and anticipation of epic proportions.”

Coldplay is one of the top recording artists of recent times, selling over 60 million records worldwide and winning seven Grammy Awards and five MTV Video Awards, among other honors.  They are signed to Parlophone, the legendary label known for The Beatles, Radiohead, Queen, David Guetta and more.

The first installment of The Hunger Games was the 13th highest-grossing North American release of all time on its way to grossing nearly $700 million at the worldwide box office.

This is the first in a series of highly anticipated announcements of the new artists to be revealed in the coming weeks.

The first Hunger Games partnership between Republic Records and Lionsgate yielded the Grammy Award-winning, chart-dominating The Hunger Games: Songs From District 12 And Beyond executive produced by T Bone Burnett.

The album hit #1 on the Billboard Top 200 on its release with sales over 175,000, making it the first soundtrack to top the chart since November 2009.  It was the best-selling soundtrack of 2012, the fastest selling soundtrack ever at iTunes, and was certified gold by the RIAA shortly after its release. The album earned a Golden Globe Award nomination and three Grammy Award nominations, and its first single, Taylor Swift’s “Safe & Sound” featuring The Civil Wars, won the 2013 Grammy Award for “Best Song Written for Visual Media”.

ABOUT THE HUNGER GAMES: CATCHING FIRE
The Hunger Games: Catching Fire begins as Katniss Everdeen (played by Jennifer Lawrence) has returned home safe after winning the 74th Annual Hunger Games along with fellow tribute Peeta Mellark (played by Josh Hutcherson).  Winning means that they must turn around and leave their family and close friends, embarking on a “Victor’s Tour” of the districts.  Along the way Katniss senses that a rebellion is simmering, but the Capitol is still very much in control as President Snow prepares the 75th Annual Hunger Games (The Quarter Quell) – a competition that could change Panem forever.  The Hunger Games: Catching Fire is directed by Francis Lawrence, and produced by Nina Jacobson’s Color Force in tandem with producer Jon Kilik. The novel on which the film is based is the second in a trilogy written by Suzanne Collins that has sold over 50 million copies in print in the U.S. alone.

In between one-off shows scattered around the world in the past several months The Flaming Lips have still found time to record a series of unique and experimental sessions for an album featuring a diverse cross-section of heavy friends from every corner of the musical cosmos. The Flaming Lips and Heady Fwends includes vocal and musical assistance from such disparate playmates as Yoko Ono, Nick Cave, Chris Martin of Coldplay, Bon Iver, Ke$ha and many more.

Some of these tracks have already appeared on previously released, extremely limited edition color vinyl 12″ EPs released in past months, which sold out as soon as they became available. Most of the tracks on the album are being released here for the first time and will surprise even the most ardent LIPS fans.

The Flaming Lips and Heady Fwends will be pressed on two high-quality, multi-color vinyl discs housed in separate custom art jackets and poly bagged together. No two discs will look exactly alike. This double album will be very limited and released exclusively for RECORD STORE DAY. Once it’s gone, it will not be repressed again making THE FLAMING LIPS AND HEADY FWENDS the most anticipated RSD release this year.

Track-listing for The Flaming Lips and Heady Fwends is as follows:

Record Store Day is managed by the Music Monitor Network and is organized in partnership with the Alliance of Independent Media Stores (AIMS), the Coalition of Independent Music Stores (CIMS) and celebrates the culture of independent record stores by playing host to in-store events/performances, signings and special product releases on a global scale on Saturday, April 21st, 2012.

With 4 number one records, countless stellar remixes, a host of breath-taking videos and 3 non-stop world tours, 2011 will go down as Fedde Le Grand’s most productive and successful year to date! In saying that however, the Dutchman has still saved the very best for last – because his undeniably luscious remix of Coldplay’s stunning “Paradise” plucked straight from the forthcoming album Mylo Xyloto, is finally upon us!
BUY COLDPLAY – ‘PARADISE’ (FEDDE LE GRAND REMIX) ON BEATPORT
Already a huge fan of Coldplay, and having knocked up his own private edits of various masterpieces such as “Clocks” (yes, the whole world wanted that one), Fedde now officially steps up to the remix plate with what is an emotive, driving, goose-bump inducing masterpiece. Le Grand’s flawless production combined with Chris Martin’s impeccable ability to deliver the most renowned vocal make this Fedde Le Grand’s best work yet, fact!
Having premiered on Pete Tong’s radio show on Friday 14th October and with full support from Coldplay over the weekend, “Paradise” gets it’s PRE-RELEASE today!
“Paradise” is available on Toolroom Records and exclusively at Beatport. The record is not only set to be a hit at this year’s Amsterdam Dance Event, where Fedde performs at both the DJMag Top 100 party and his own Annual Takeover Event; it bears the all the hallmarks of becoming another world-wide blockbuster!

Check out the newest single from Coldplay, “Major Minus.” The band’s new EP, Every Teardrop is a Waterfall, is scheduled to release digitally on June 26th and physically on the 27th.

Here’s the EP’s title track for your listening pleasure, too…incase you haven’t heard it yet.

Tagged as Chris Martin, Coldplay, Every Teardrop is a Waterfall, Major Minus, new EP, new tracks