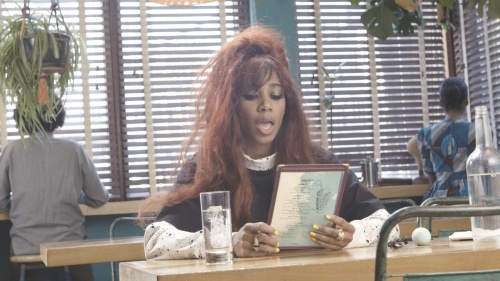 Following the release of her third album 99¢ on Atlantic Records, Santigold has revealed the standalone version of her innovative video for “Can’t Get Enough Of Myself (feat. B.C.),” one that viewers can enjoy without webcam access. The video features Jay Z, Andy Samberg, Alexander Wang, Olivia Wilde, Pharrell Williams, Yung Jake, and Santi herself, and some of her fans popping up as she walks through New York City.

The original interactive version of the video (posted here) uses the camera of the viewer’s computer or mobile device to incorporate them into the video in real time. It was directed by Santigold and Sam Fleischner and conceptualized and digitally developed by Yung Jake and Vince Mckelvie, with mobile app development by Bryan Yee. It plays on pop culture’s fascination with viewing and manipulating one’s own image. The video should be viewed on the web using Chrome as the browser and is available for mobile handheld devices via the “SANTIGOLD” app available in both the Apple/Android app stores. Experience it at Santigold.com/Webcam

London’s own Louisa Rose Allen, better known as Foxes, will release her full-length debut album Glorious in the US digitally on Monday, June 23rd. The album debuted in the Top 5 on UK Album Charts when it was released earlier this year overseas. Additionally, Foxes will support Pharrell on his UK tour later this year.

Foxes recently won a Grammy for Best Dance Recording for “Clarity” with Zedd which they performed on Late Night with Jimmy Fallon! and Late Show with David Letterman.

The stunning Foxes has graced the cover of UK’s Fabulous and The New Review as well as gorgeous features in UK’s InStyle and stateside in the likes of Flaunt, Elle, Marie Claire and NYLON. Stay tuned to see Foxes make a cameo on an upcoming episode of BBC’s sci-fi hit “Doctor Who.”

Listen: Foxes – Holding On To Heaven (The Chainsmokers Remix)

Until One is the new album by Swedish House Mafia, which will be released Tuesday, Oct 26th. This album is quickly gaining HUGE momentum.  Their single ‘One (Your Name)’ feat. Pharrell is a top 3 iTunes & Billboard dance track with a video that has garnered over 20 million views on Youtube (adding over a million every week). Having recently graced the covers of DJ Times, Future Music and Mixmag, Swedish House Mafia have developed one of the most exhilirating live shows around, wowing thousands of fans at Miami’s Ultra Music Festival and LA’s Electric Daisy Carnival, where they were proclaimed one of the highlights of the weekend. This album is also a soundtrack to their forthcoming DVD “Take One,” a film by Christian Larson which is a documentary about Swedish House Mafia. Check out the trailer streaming exclusively on MTV.com by clicking here.

Spinner has the video up for Swedish House Mafia vs. Tinie Tempah “Miami 2 Ibiza,” which you can check out here.

Look out for the new album next week, it includes some awesome stuff old and new. And if you’re in Miami or Vegas next weekend, definitely check out the Mafia live!